This website or its third-party tools use cookies which are necessary to its functioning and required to improve your experience. By clicking the consent button, you agree to allow the site to use, collect and/or store cookies.
I accept
You are here: Home / Coaching / Priorities – How to Get Your Most Important Work Done

Are You Working On The Most Important Stuff This Week?

Ever Get Frustrated By All The Problems At Work?

Many years ago I worked as a hands-on technologist and frankly I was pretty frustrated. I could see lots of things that were “broken” around me, and I wanted to fix them. Unfortunately I didn’t have the formal power or budget to tackle them, and I found myself blocked at every turn from REALLY making a difference at work. That bugged me. A lot.

I was reminded of my experience as I sat down with a client this week.

Joe is in his early thirties, has done some solid work in his career, and now finds himself in charge of a team of geeks.

On top of the typical day-to-day challenges in his job, Joe sees that there are fundamental disconnects between what the organization SAYS it wants, and how it behaves. 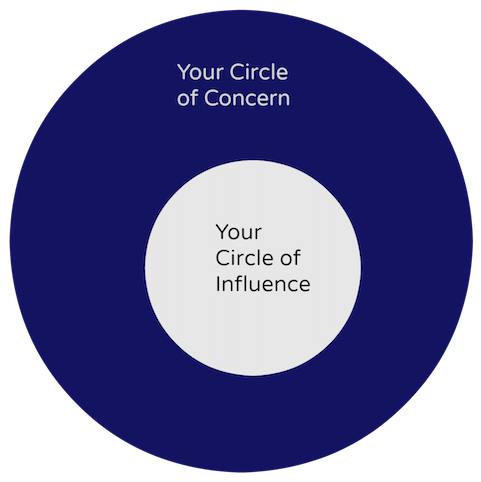 Joe sees problems that he does not have the budget, staff or political support to tackle.
Joe feels overwhelmed by the fact that he wants to fix ALL the problems.
On his own he simply can’t make it happen.
Joe’s been losing sleep over the frustrations, pain and failed projects.

Joe’s circle of concern is FAR larger than his circle of influence. In some ways, that’s good – he wants to help the company win, not just himself or even his department.

Concern is a good thing.

What Can Joe Do?

Should Joe stop caring? NO!

I advised him to sit down with his boss and pick 2 or 3 areas (no more than 3) where he and his team can commit to REALLY moving the needle in the next 90 days.

When he’s picking which things to work on, Joe and his team will heavily prioritize these projects over the other areas.

When management refuses to fund (or see) a problem area, Joe will keep a log of issues.

Once he’s put it in his log – or mentioned it once – he will have to stop thinking about it. That’s someone else’s problem – and Joe needs to let it be that way. 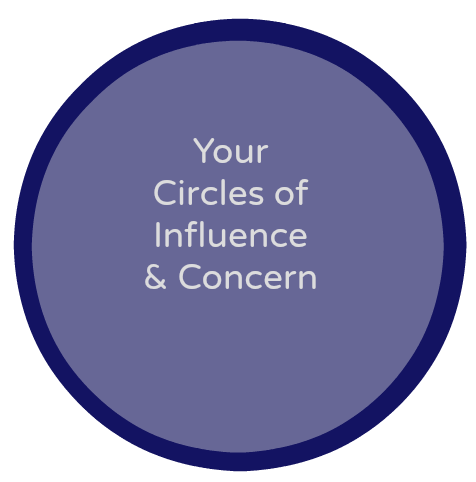 What Happens If Your Circles Don’t Match?

I used to work with Steven. Steven is a very smart guy who knew Windows XP inside and out. He was passionate, hard working, and committed to excellence in his engineering work.

Steven filed more bug reports that subsequently became Microsoft KB articles than anyone else I’ve ever heard of.

The problem? The company didn’t really care about having a perfect desktop OS.

Steven’s circle of concern was big enough to include all of the users whose machines might not wake up when they went to sleep, or machines that might blue screen when they plugged in a new device.

Steven didn’t want HIS name on any helpdesk tickets caused because he didn’t find the problem before the customer.

Because the company didn’t care, it refused to hire a team large enough to do the level of work that Steven demanded of himself.

Steven worked long hours – he skipped vacation. He worked weekends to make sure that the system was as good as he could make it. In spite of this, he missed things.

Customers complained of problems. Steven took their complaints personally. He vowed to work harder. He was burning out.

When it came time for Steven’s annual review, the company gave him an average raise. AVERAGE?!?!?!?!? he roared? Average? Didn’t they know how hard he had worked? Didn’t they see all he had sacrificed? Didn’t they appreciate what he had done for the company? For the customers?

Actually, no. They hadn’t noticed. They were not measuring that. It was not personal – it was that they had other priorities, other investments.

His bosses thought it was good that Steven did good work, but his “above and beyond” effort had zero effect on his compensation.

What Happened to Steven?

I felt bad for him. The last contact I had with Steven was about 8 years ago. I just looked him up on LinkedIn. He’s doing the same job today that he was doing then. I’d bet he’s still unhappy.

What can you do right now to “right size” your circles of concern and influence?  How can you set priorities that matter to your boss and to your company?

What 2-3 things can you and your team deliver over the next 90 days?

What’s your plan to under-promise and then over deliver on all of them?

Getting important things done will make you and your boss a LOT happier.