This website or its third-party tools use cookies which are necessary to its functioning and required to improve your experience. By clicking the consent button, you agree to allow the site to use, collect and/or store cookies.
I accept
You are here: Home / Blog / How to be a more effective geek in 2015

I was in trouble

It was my 3rd semester in College.  I was in trouble.  I was out of money and out of financial aid. I had a cumulative GPA of 1.6.  That’s right.  Cumulative.
I had started college because my parents (who had dropped out when they were kids) drilled into me how important college was.  I went to please them.  I went because I believed it would have been a stupid financial decision to try to earn a good living without a college education.  I went because I didn’t want to do blue collar work, and all my friends went to college.
Up to that point, I was a classic underachiever.  I did just enough to get by.  I had never learned how to study.  A professor challenged me.  She said “Tom, you’re getting a ‘B’ in my class.  If you actually showed up for lectures, I’d bet you’d have an ‘A’.”
I replied “what’s wrong with a ‘B?'”
I hadn’t developed the personal discipline to consistently attend class, much less take my education seriously.
I could not afford to continue at the private college.  I transferred to a local state school.  I moved back in with mom and dad.  I bought a clunker to drive (which broke down a lot.) I got a job as a waiter.  School didn’t get better.  My grades were still bad.
After 2 semesters at the state school, I should have been suspended.  I was ready to quit.  My dad pushed me to stay in school – even for just one class.  He challenged me to call the registrar.
Someone in the registrar’s office messed up.  They had never gotten around to processing my academic suspension paperwork.  They let me take calculus-based physics 101 (again.)
Over the next few months I worked about 30 hours a week, and commuted 40 minutes each way to class.  I think I got a C in Physics.  I was exhausted.  I was depressed.  I was frustrated.  I felt stupid.  I felt like a failure.  I was sick of waiting tables.  I was sick of feeling stupid.  I was sick of being mad at myself.

Have you met this dog?

There’s an old story about a mailman with a farm on his route.
Every day when he delivers mail to the farm, he sees the farmer’s dog sitting on a porch moaning quietly to himself.
One day the mailman sees the farmer outside and calls him over.
He asks: “Why is your dog lying in the same spot on the porch every day and always moaning?”
The farmer says “Oh.  That.  There’s a nail sticking out of the porch right there. The dog is sitting on it.”
The mailman asks: “Why doesn’t the dog move?”
“I guess it doesn’t hurt him enough,” the farmer replies.
Up until then I was the dog on the porch.  I was moaning about my life, my circumstances, my frustrations and my self-perception.  And I was lying on the nail the whole time.  I was stuck.

Have you ever been “stuck” at work?

Have you ever been:
Have you ever wondered what it would take to move beyond the churn of short deadlines, small budgets and clueless bosses?

I was in pain

That semester in college was a defining moment in my life.  What would I do?
I was in pain – real pain – and finally it hurt enough.  I decided to change.
But… how?
I evaluated what I wanted:
I evaluated the problem: My undergrad degree would be the “ticket” to the kind of life I wanted, but I didn’t know how to “do school.”
I needed help.  I searched and found a system that promised results.   It was not cheap.  I was going to have to take a chance.  Take what seemed like a lot of money out of my wallet (I was only earning $2.01/hour plus tips.)  Take the risk of failing again.  The scariest part – what if I tried it and it didn’t work?  I knew what would happen if I didn’t change something.  More of the same.
Up to that point I was unwilling to invest in myself – why was I surprised that no one else was willing to do it?
I decided to take a risk by betting on this system.
I was betting on me.  I bought the cassette tapes and workbook.  I listened to them intently.  I looked for ways I could change.  The system was full of little tips and tricks to help me get better.  I applied what I was learning.  I realized that in spite of my brains, and the time I was putting in that I was making a series of small mistakes, and repeating them over and over again.

I decided to change.  I decided to invest in myself.  I decided to set a big goal.
I did it.  I went from academic probation to the Dean’s list.  From a 1.6 GPA to a 4.0.  I made the dean’s list every semester, even while taking more than 20 hours of coursework.
Two years later I graduated from the private college with a cumulative GPA of 3.03 (when you start as low as I did, every 0.3 counts!) 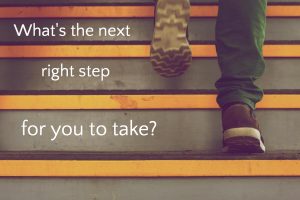 You can be a more effective geek in 2015

In 2015, you can be a more effective geek, tech lead or team manager.
Do you know the next right step to take?
Here are some questions to ask yourself:
I help highly technical experts (geeks) find ways to make small tweaks in what they are doing to lead to more success.
That’s what I do for my clients, and I may be able to help you – if you’re ready.
Not sure if you’re ready?  Let’s set up a “clarity and focus” call.  Send an email to tom@BrightHillGroup.com
In a brief conversation we can figure out whether working with me now is a good idea.
2015 can be your best year ever.  Are you ready?
Share
Share
Tweet
Pin
0 Shares