This website or its third-party tools use cookies which are necessary to its functioning and required to improve your experience. By clicking the consent button, you agree to allow the site to use, collect and/or store cookies.
I accept

What “color” is your attitude?

I spent part of my weekend repainting a room. The previous owners of my house had a room designated to be a media room, and had painted the walls, ceiling and trim a deep, dark blue. That seemed to be ideal – it removed all distractions from the “main attraction.”

I have an entirely different purpose in mind for that space, and I’m going with a much different color scheme.

As we began putting the first of a few coats of primer on the walls we began to notice something. The room was really transformed. It went from a dark, cave-like feel to an open, bright feel. The room felt bigger. The new paint reflected light and helped me see – even in the previously dark corner recesses!

It occurred to me that all too often our attitude at work is like that blue paint. Our darkness is so “normal” to us that we don’t even notice it. Those around us may think “That’s just the way he is.”

What is your attitude like? Are you sucking the light out of the room or reflecting light, possibilities and opportunities wherever you go?

My friend Ian Altman says “All people bring joy.  Some when they arrive, others when they leave.”  Which group are you in?

I used to work with a man I teased about being Eeyore.  Those of you who read Winnie the Pooh may recall that Eeyore the donkey was a pessimist’s pessimist.  Pooh’s Eeyore would say things like “I suppose that’s the sort of thing you like, if you like that sort of thing.”  Eeyore simply could not find a positive in his circumstances.

My “Eeyore” was so negative that I believe if you handed him a $100 bill he would complain that it wasn’t $200, or that it really would have come in handy two weeks ago.

When my grandmother was no longer able to drive, she asked me to sell her car for her.  It really was the used car driven by the little old lady who only drove it to the grocery store and church on Sunday.  I knew that Eeyore was looking for a reliable car for his son to drive, and I asked if he might be interested in buying it.

One thing I know about cars.  They need maintenance.  There’s always a story to tell about a problem with them.  Something breaks, wiggles, rattles or even falls off!

When Eeyore said he was serious about buying the car, I wrote up a contract.  I knew I didn’t want to hear about that car after the sale.  I also knew that Eeyore was, well, tight with a dollar.  I wanted to protect myself, and I had a flash of brilliance.

The purchase agreement literally said “If the buyer ever complains about anything related to this car, he will immediately pay the seller $5 cash for each negative statement.”

When he saw it, he smiled broadly.  He laughed loudly.  He signed the contract.

You know what happened?  He NEVER said a negative word to me about that car.

Eeyore drove that car for another 160k miles.  For the next several years, every single time I saw him, he’d smile and make a point of telling me what a great car that was, and how it was working well for him. Every.  Single. Time.

His complaining had become a habit, and he could choose to be positive.  I’m sure that car needed all kinds of work over the years, but Eeyore never mentioned that to me – he focused on the good parts about it.

How are you affecting others around you?  What do you need to do differently?

1. Say to a close coworker:
“As a part of my personal growth plan, I’m asking others for input.  Be completely honest with me.  I won’t get defensive or upset.  I need this straight.  When you think of me, how would you describe my attitude – positive, negative, neutral or something else?”

2. Don’t be Eeyore.  Choose a positive attitude.  Choose gratefulness.  Choose to comment on the positive.  Look for something positive to say today.  Be intentional about it!

Our attitude affects our success.

“A great attitude does much more than turn on the lights in our worlds; it seems to magically connect us to all sorts of serendipitous opportunities that were somehow absent before the change.” – Earl Nightingale 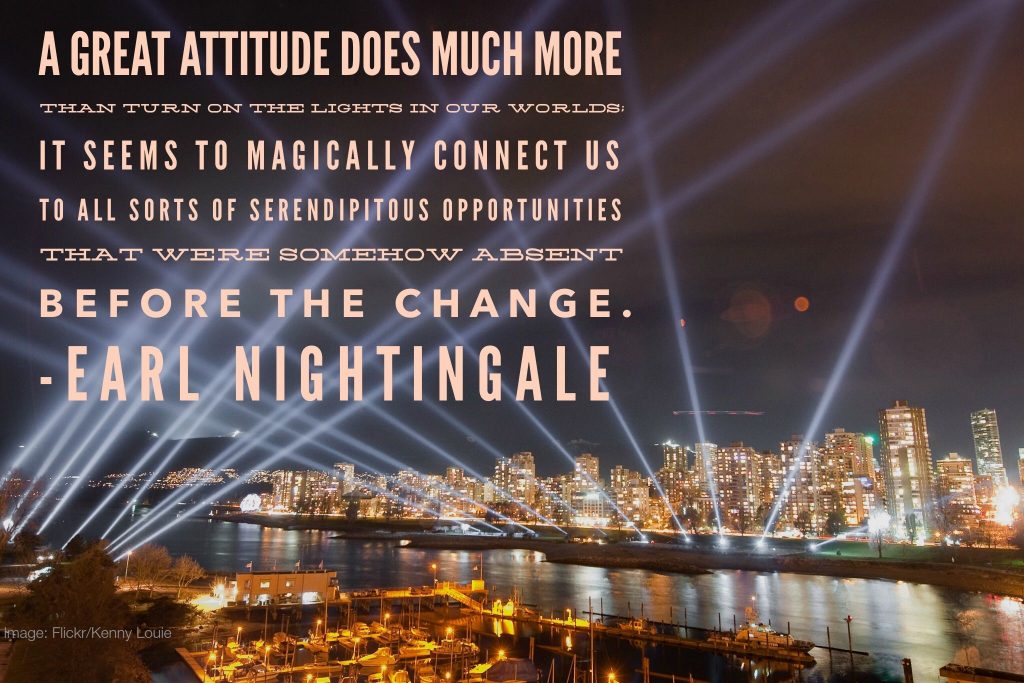